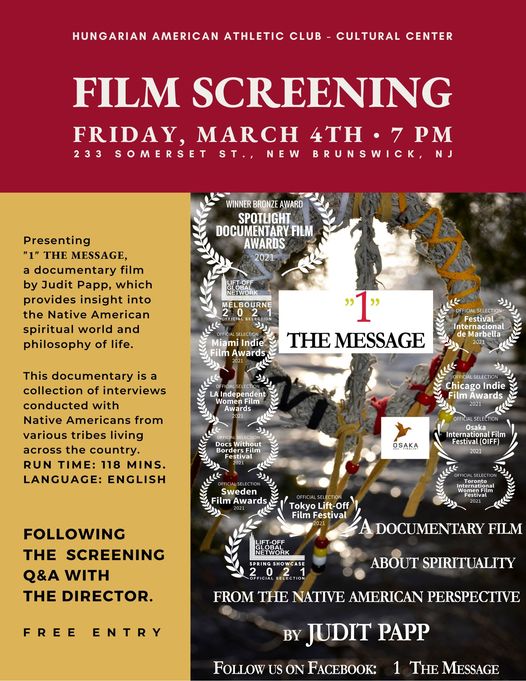 On Friday, March 4, 2022, Brookdale Alumna Judit Papp will debut her first film screening. A documentary film about spirituality from the Native American perspective.

It will occur at the Hungarian American Athletic Club and Cultural Center at 233 Somerset Street, New Brunswick, NJ, starting at 7:00 p.m. Admission is free.

Following the film screening there will be a Q & A with the Director Judit Papp.

“1” THE MESSAGE is a documentary film that has been screened at 12 renowned national and international film festivals.

This documentary provides insight into the Native American spiritual world and philosophy of life. It is a collection of interviews conducted with Native Americans from various tribes living across the country.

The run time is 118 minutes, and the language is English.

It was the winner of the Bronze Award at the Spotlight Documentary Film Awards and received the Kudos Award at the Doctors Without Borders Film Festival, and reached the semi-finals in Sweden.

Judit holds an AA in Photography and AS in Humanity Service Addiction Studies from Brookdale Community College, where she was Phi Theta Kappa, Tau Upsilon Alpha, and Psi Beta. In addition, she holds a BA in Broadcasting and Film from Seton Hall University and a MA in Cinema and Media Studies from CUNY College of Staten Island.

WE CONGRATULATE JUDIT ON HER AWARDS AND WISH HER SUCCESS IN HER FUTURE ENDEAVORS!