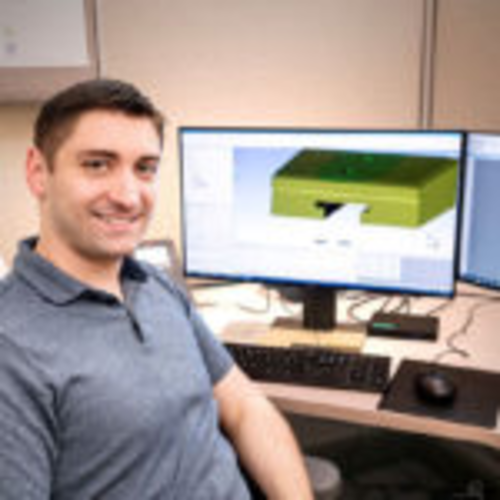 Nick Santoro, a Brookdale Community College graduate, is working at the U.S. Department of Energy’s (DOE) Princeton Plasma Physics Laboratory (PPPL) as one of the first engineers in a new program designed to introduce engineers to different areas of the field. Santoro, along with a colleague, are the first two in a rotational engineer program where they will complete six-month rotations in four different engineering areas over two years.

“I like my job, and I think the mission to research plasma physics for energy production is a noble cause,” said Santoro. “I work on interesting and challenging projects, and I feel like my work is appreciated because I put a lot of thought into it.”

However, Santoro, a first-generation college student, did not have the goal of a degree in STEM (Science, Technology, Engineering, and Math) and a job at PPPL in mind when he graduated high school. “I would say that I was never a natural academic, and I wasn’t particularly skilled in any topic in high school as far as I can remember,” he explained. He first enrolled in Brookdale as a criminal justice major, but realized that was not for him. He left Brookdale and entered the workforce.

Santoro spent time working as auto technician where he got “hands on experience with concepts that originated in mechanical engineering,” he said. “The systems in place in modern cars are great examples of every single mechanical engineering course from start to finish all packed into one product.” He also joined the Air Force. “It was years after working dead end jobs that I would join the military and decide to start over again at Brookdale for something I was more interested in,” he explained. While in the Air Force, Santoro worked with electrical power production. “My time in the Air Force was not specifically what drove me to engineering. I always had a curiosity for how and why things worked the way they did,” he said.

After his time in the military, Santoro decided to return to Brookdale, but this time as a mechanical engineering major. “I had a lot of classes that I needed to take just to even begin my major,” he explained. Brookdale was the best financial decision for him. “At Brookdale I caught up on my math skills starting out at Math 151. Pursuing the same program elsewhere would have cost a fortune,” he said.

Santoro had doubts about whether or not he would be successful as a mechanical engineering major. “I had never really thought that I would be able to make it at first because engineering courses have a reputation for being tough, but I realized once I started that I understood the concepts and I knew that they had real applications because I had seen them,” he explained about his time working as an auto technician and how it helped with his engineering courses.

Time and hard work made Santoro successful in his engineering and math courses at Brookdale. “The math work all came to me from thousands, at least it felt that way, of hours of rigorous practice.” He said he spent a lot of time in the Math Lab as well as in the Physics Lab.

In addition to all of the math practice, Santoro also credited Lisa Hailey, professor in the engineering and technology department, with helping him achieve success at Brookdale by going beyond the classroom and helping him outside of class. “There are concepts in mechanical engineering that are difficult to grasp at first, so having someone take additional time to re-examine them with students was appreciated,” he said.

“I am thrilled, but not surprised, to hear about his success,” Hailey said about Santoro. “What was a stand out to me about Nick was that he never hesitated to come see me when he had a question. He was always interested in truly understanding the concepts and was always prepared to work hard.”

Santoro graduated Brookdale with his AS in Mechanical Engineering in 2016. He then transferred to New Jersey Institute of Technology (NJIT) as a mechanical engineering major. “Transitioning to NJIT was intimidating at first, but they took more of my credits than some other schools did, so it just made sense to go there,” he said. Brookdale has an articulation agreement with NJIT for engineering students, so Santoro was able to transfer all of his credits. Santoro said Brookdale prepared him well for the transfer. “I made sure I started out with some easier classes to get situated for my first semester and to make the transition easier,” he said. “Avoiding tough classes like Stress Analysis for my first semester was definitely a good idea in retrospect,” he said.

“For that reason, I found a job that was more in-line with problem solving project-based work.” Santoro started working at the Princeton Plasma Physics Laboratory in the summer of 2019. “I use everything I spent time learning in undergrad and I still have every book I ever used. I reference them all the time,” he said of his position at PPPL.

Santoro and one of his colleagues are the first two engineers at PPPL in a new rotational engineer program. “I liked the idea because I get to do a bit of everything around the lab,” he explained about the new position. His rotation started in the Plasms Facing Components (PFC) team. “I helped test and modify some of the tiles that form the wall which prevents heat flux on sensitive components,” he said. For the next six months, he will be working with the Diagnostics team before moving on to another department.

In addition to his new position at PPPL, Santoro also started graduate school in the fall. He is at Rutgers University in the mechanical engineering program and would like to concentrate on solid mechanics. “I wish I spent more time learning differential equations and linear algebra,” Santoro said with a smile. He explained the majority of math he is doing in grad school is based on those concepts.

“My little experience working as an engineer has taught me that it can be very difficult to solve real-life problems, and sometimes there are few resources or solutions available,” Santoro said. “That means you may be the only one who can come up with a solution for yourself.” He certainly has found his own solution which started at Brookdale.